How Corporate America Dilutes Its Shareholders

When companies buyback/repurchase their shares on the open market or through an optional purchase from shareholders, this reduces the number of outstanding shares with the hope that this will increase the market value of the remaining shares by increasing the per-share earnings even if earnings actually remain constant.  A buyback usually takes place when the executive and board members of a company feel that a company's shares no longer represent a fair value.   Let's look at the impact of buybacks on earnings-per-share for some recent corporate buybacks:

Microsoft - purchased 3 percent of its outstanding shares, third quarter earnings were down 1.3 percent from a year earlier but per-share earnings rose 3.1 percent

Wells Fargo - a 0.6 percent increase in total earnings from a year earlier ended up with per-share earnings increasing by 2.9 percent

Pfizer - a 2.0 percent increase in total earnings from a year earlier ended up with per-share earnings increasing by 5.3 percent

Over the 12 months through the third quarter of 2015, more than 20 percent of all companies listed on the S&P 500 reduced the number of their outstanding shares by at least 4 percent. 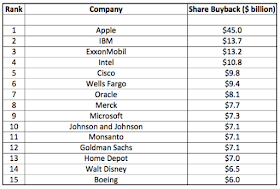 Many critics feel that share buybacks are an artificial and short-term way to make it appear that companies have boosted their profits.  What it is really telling us is that companies simply aren't interested in investing their profits or cash on hand in either capital or in purchasing other companies.

Now, let's look at the other side of the coin; stock issuance.  Here is a table showing the top 15 largest companies (as measured by cash flow) by stock issuance in 2014: 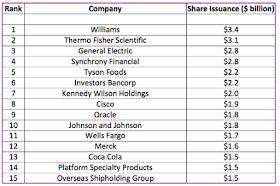 Do you notice anything curious about the two tables?  That's right, five out of the top fifteen companies in the share buyback table are also in the top fifteen share issuance table; Cisco, Oracle, Johnson and Johnson, Merck and Wells Fargo.  While these five companies have implemented massive share repurchasing programs that supposedly benefit their shareholders by reducing dilution, at the same time, they are issuing more shares on the open market. Why is this?

It's all about executive compensation.  When the top floor dwellers, particularly those who spend their days in the corner offices, redeem their ample stock options, the company must issue new shares which, of course, dilutes other shareholders.  By announcing share repurchases, the companies are looking to roughly balance the unbalancing impact of issuing ever larger volumes of new shares when their executives redeem their stock options.  This means that the potential benefit of share repurchases to "Mom and Pop" investors may be completely offset by a company's "need to retain executive talent".

Let's look at the example of Cisco to get a sense of the size of the share repurchase and stock option issues.  From the company's 2015 Annual Report we find that during fiscal 2015, the company repurchased 115 million of their own shares at an average price of $27.22 for an aggregate purchase price of $4.2 billion as shown on this table which also shows the repurchases for 2013 and 2014:

Since the inception of the stock repurchase announcement on September 13, 2001, the company has retired 4.4 billion shares of its common stock for an aggregate purchase price of $92.7 billion.  This is money that was not invested in dividends for all shareholders and it was not invested in creating a "better Cisco"   Considering that this is a company with total market capitalization of $140.25 billion (at its current trading price of $27.50), $92.7 billion in share buybacks are substantial.   Just in case you were curious, here's how Cisco's total return compares to its S&P 500 peers (square boxes): 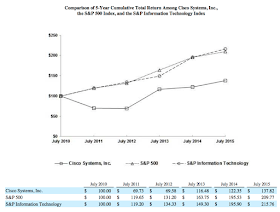 It doesn't really make the company's share repurchase program look all that wonderful for retail shareholders, does it?

According to Cisco's Stock Incentive Plan effective November 2013, no more than 694,000,000 shares can be awarded as options.  As well, the aggregate number of shares that can be issued as SARs must not exceed 694,000,000 shares.  According to the company's 2015 Annual Report, there were 5.146 billion outstanding shares in 2015, down from 5.281 billion in 2014 and 5.38 billion in 2013.  This shows us that by decreasing the number of outstanding shares, a higher and higher portion of the company's total shares can be issued as options and SARs which will have a diluting impact on all other shareholders.

Many critics feel that share buybacks are an artificial and short-term way to make it appear that companies have boosted their profits.  What it is really telling us is that companies simply aren't interested in investing their profits or cash on hand in either capital or in purchasing other companies.  When the same company that is repurchasing stock is also issuing stock, it tells us that its corner office floor dwellers are being well cared for.