Given the expedience of today's air travel, an outbreak of a deadly virus like Ebola could spread very rapidly.  Back in 1989, there was a very close call with such an outbreak in the United States, sourced at a research institute located very close to one of the most highly populated regions in America.

Let's open with a photo of the Ebola virus: 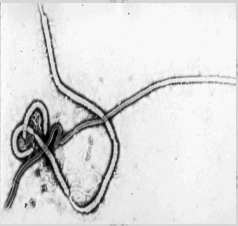 Reston, located about 10 miles from Washington, DC, was home to the Reston Primate Quarantine Unit, part of Hazleton Research Products (now Covance Inc.).  In the 1980s, Hazleton   was the world's largest independent biological testing company and the largest manufacturer of scientific equipment in the world.  Covance, once part of Corning Incorporated, still deals in the importing, breeding and sale of laboratory animals.

During the period between the 1940s to 1970s, various species of primates from both Africa and Asia were imported into the United States to aid the scientific community in disease research.  The risk that these primates would carry a communicable disease was not lost on researchers who established a protocol that led to the quarantining of primates for between 40 and 90 days under the watchful eyes of the United States Public Health Service.

The first outbreak of a primate-related virus occurred in 1967 at a laboratory in Marburg, Germany.  Imported African green monkeys carried a virus that caused severe hemorrhagic fever in both humans and non-human primates; the Marburg virus caused 31 cases of hemorrhagic fever that resulted in seven deaths.  The same virus re-emerged in 1975 in Johannesburg, South Africa, again in the period between 1998 and 2000 when it killed 150 people in the Democratic Republic of Congo and in 2004 when it killed 227 people in Uganda.

In October 1989, 100 crab-eating macaques were imported from Ferlite Farms, located in Calamba, Laguna south of Manila, Philippines, and ended up at the Reston Primate Quarantine Unit.  At that time, the Reston facility already had 500 macaque monkeys housed in their facility.  Shortly after their arrival, scientists started noticing an abnormally high mortality rate; by the beginning of November 1989, 29 of the 100 monkeys had died.  In a post-mortem examination, the on-site veterinarian, Dan Dalgard, noticed that the interior of the body looked very strange with a massively swollen spleen and blood inside the intestines.  He suspected that the deaths were caused by simian hemorrhagic fever or SHFV.

Reston's veterinarian then sent samples of the tissues to the United States Army Medical Research Institute of Infectious Diseases or USAMRIID, located north of Reston at Fort Detrick, Maryland.  USAMRIID is the only laboratory in the Defense system that can study high risk viruses that require maximum biohazard containment.  The virus that caused the SHFV was considered to require a Biosafety Level 4 (BSL-4) designation, the highest level of containment.  When working in a BSL-4 lab, scientists wear a Hazmat suit and have a self-contained oxygen system.  They work in negatively pressured room to prevent viruses from escaping and must go through a series of showers before entering and exiting.  In the case of the SHFV filovirus, the veterinarian at the Reston facility sent the frozen samples to the USAMRIID wrapped in tin foil.  By the time the samples arrived at their destination, they had thawed and fluids were dripping from the packaging.

Meanwhile, back at the Reston facility, veterinarians euthanized the remaining monkeys from the October shipment, however, despite those precautions, monkeys in other rooms began to show the same symptoms and die.

USAMRIID analyzed the Reston virus and determined that the cause of death was Ebola, the same strain that had caused the outbreaks in Zaire and Sudan in 1976.  In those outbreaks, more than 600 cases were noted with a mortality rate of 53 percent in Sudan and 88 percent in Zaire.  By the time USAMRIID had ascertained that the Ebola - Zaire virus was responsible, six weeks had passed since the monkeys started dying in Reston, Virginia.  A program was put in place by USAMRIID, the Centers for Disease Control and the Virginia Department of Health to prevent the virus from spreading.  When USAMRIID staff arrived for a walkthrough of the Reston facility, they found staff and animal handlers were still working without taking precautions.  The decision was made to euthanize all of the facility's monkeys, however, during the process, a single monkey escaped.  It took the better part of two days to catch and euthanize the escapee, an incident that could have led to further infections.  For the following eleven days, the Reston Primate Quarantine Unit was decontaminated using bleach.  Decontamination also included a three day period when the building was filled with formaldehyde fumes to ensure complete cleansing.

Of the 1787 staff members who had contact with the infected monkeys at the Reston facility, only two were hospitalized.  It was also found that six people who had worked with the primates had serologic evidence (i.e. antibodies) of an ebola infection.  Both hospitalized staff survived their illnesses.  Scientists later found that the Reston virus was a new variant, now known as EBO-R, that had slight genetic differences from the other known ebola viruses.  An additional six individuals had  In the Reston variant, there was a high death rate among infected monkeys, however, it was not deadly to humans.

Given that the Ebola virus is spread through direct contact with the blood or secretions of an infected person or exposure to objects that have been contaminated with infected secretions, if the Ebola outbreak in the densely populated Eastern United States had been of a type that had a high human mortality rate, the Reston outbreak may have been a history-changing event.