The United States Navy and its Littoral Combat Ship Debacle

While it got almost no coverage in the mainstream media, a recent story from FreightWaves is cause for concern, particularly for American taxpayers.  For the purposes of this posting, I will provide significant background information so that you can better understand the severity of the problem.

Let's open by looking at a video showing the launching of the USS Billings back in July 2017:

Here is a video showing the new Freedom class of Littoral Combat Ship (LCS) in action, in this case, the seventh ship, the USS Wichita (LCS-7_ which was commissioned on January 12, 2019:

Littoral combat ships are designed to operate in shallow waters (i.e. near shore waters) that prevent the access of larger naval vessels.  The current iteration has a sprint speed in excess of 40 knots, draft of less than 20 feet and have an unfueled range of more than 3500 nautical miles at a speed of 14 knots.

As shown on this screen capture, the Freedom-variant of the Littoral Combat Ship is being built by Lockheed Martin: 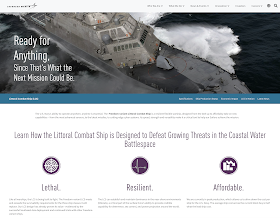 Here is a graphic showing the production status of the Freedom-Variant Littoral Combat Ship:

Lockheed Martin touts the economic impact of its contract to build this version of the LCS: 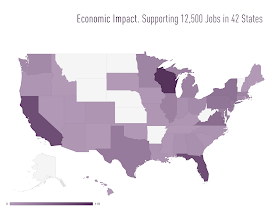 The first LCS was procured in 2005, four years after the start of the LCS program on November 1, 2001.  In total, Lockheed Martin has built and launched 11 Freedom-variant Littoral Combat Ship with seven ships being commissioned and an additional five in either pre-production or under contract to be built.  Freedom-variant ships are oddly numbered (i.e. LCS-1, LCS-3).  Another variant of the LCS, the Independence-variant, is being built by Austal USA (originally General Dynamics) and these ships are evenly numbered (i.e. LCS-2, LCS-4) which just delivered LCS-20 to the U.S. Navy as shown here: 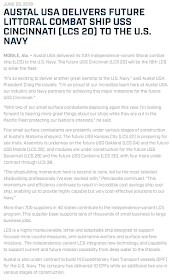 Here is a photo showing the two iterations of the LCS: 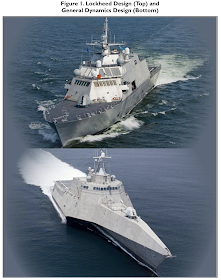 According to the Congressional Research Service, the Navy has planned to procure a total of 35 LCSs and fiscal 2019 will be the final year of procurement of these vessels.  It is interesting to note that the three LCSs in fiscal 2019 are expected to cost taxpayers $1.571 billion or $523.7 million each.  Here is a table showing the annual LCS procurement quantities:

According to an analysis by the National Priorities Project, here is the expected cost of the LCS program for fiscal 2012:

While all of this sounds absolutely wonderful, the LCS program has been fraught with cost overruns and significant mechanical failures.  According to Military.com, three of the Freedom class ships have suffered engine casualties with the USS Freedom, the first Freedom-variant LCS to be launched, requiring an engine replacement or rebuild after a seawater leak resulted in damage.  A seal in the seawater pump failed, allowing seawater to contaminate the engine lubrication system, damaging the ship's second main propulsion diesel engine.  After two years   , the ship finally returned to service in 2018.  The USS Fort Worth also had an engine "casualty" thanks to possible user error when lubrication oil was not appropriately applied to the ship's combining gears during startup.  The USS Milwaukee underwent engine repairs after it broke down on a trip from San Diego to Halifax, Nova Scotia, Canada, thanks to the failure of a clutch to disengage when the ship was switching from its gas turbine to its Diesel engine drive system.

These ships were designed to be the backbone of the future U.S. Navy.   That said, it would not appear that the Navy has any confidence in the LCS program.  Here is a key quote from a report from fiscal year 2017 by the U.S. Navy on its Littoral Combat Ship program:

"Survivability testing and preliminary analyses on both LCS variants continue to demonstrate that neither LCS variant is survivable in high intensity combat. Although the ships incorporate capabilities to reduce their susceptibility to attack, testing of analogous capabilities in other ship classes demonstrated that such capabilities have limited effectiveness in high intensity combat. As designed, the LCS lacks redundancy and the vertical and longitudinal separation of vital equipment found in other combatants. These features are required to reduce the likelihood that a single hit will result in loss of propulsion, combat capability, and the ability to control damage and restore system operation." (my bold)

The report also noted the following:

The Navy had plans to create 44 mission modules (i.e. combat system element models) that would be capable of rapid changing over of weapon systems (i.e. for mine hunting, anti-ship and anti-submarine warfare) but none of these modules was ready in late 2018.  At that point, the ships were equipped with a 57 mm gun, the same as Coast Guard vessels.

It would appear that as a consequence of this rather significant set of issues, in July 2017, the Navy posted the official requirements for a new "hull" to take on coastal combat operations as shown here:

This platform will "...employ unmanned systems to penetrate and dwell in contested environments, operating at greater risk to gain sensor and weapons advantages over the adversary.  The FFG(X) will be capable of establishing a local sensor network using passive onboard sensors, embarked aircraft and elevated/tethered systems and unmanned vehicles to gather information and then act as a gateway to the fleet tactical grid using resilient communications systems and networks."

It appears that the FFG(X) dosing will go well beyond what the LCS can do in surface warfare...hopefully.  The Navy's proposed fiscal 2020 budget requests funding for the first FFG(X)

Now, in closing, let's finally look at the news item from FreightWaves:

It's interesting to see that a program that just a decade old from the time of first delivery certainly has not met with great success.  Fortunately for the manufacturers, there is a bottomless bucket of taxpayers' dollars to draw from.

"Exploit simplicity, numbers, the pace of technology development in electronics and robotics, and fast reconfiguration. That was the US Navy’s idea for the low-end backbone of its future surface combatant fleet. Inspired by successful experiments like Denmark’s Standard Flex ships, the US Navy’s $35+ billion “Littoral Combat Ship” program was intended to create a new generation of affordable surface combatants that could operate in dangerous shallow and near-shore environments, while remaining affordable and capable throughout their lifetimes.

It hasn’t worked that way. In practice, the Navy hasn’t been able to reconcile what they wanted with the capabilities needed to perform primary naval missions, or with what could be delivered for the sums available. The LCS program has changed its fundamental acquisition plan 4 times since 2005, and canceled contracts with both competing teams during this period, without escaping any of its fundamental issues. Now, the program looks set to end early. This public-access FOCUS article offer a wealth of research material, alongside looks at the LCS program’s designs, industry teams procurement plans, military controversies, budgets and contracts."