The Post-COVID-19 Utopia....According to Bill Gates

Former purveyor of virus-prone software, Bill Gates, may have accidentally (or otherwise) exposed why it is that we are under unprecedented lockdown during the current coronavirus pandemic/social experiment.  In part one of this two part posting, I looked at Mr. Gate's contribution to the world of health through his investment of hundreds of millions of dollars to the World Health Organization.  In part two, we will take a closer look at how Bill Gates believes that governments should handle our post-pandemic world.

Here is a recent TED talk with Bill Gates:

I particularly like his comment at the 1 minute and 47 second mark when he is asked about being stuck at home like "many of us".  Here is what he had to say:

"Almost all my meetings are using Teams (a Microsoft communication platform) now, I'm getting used to that.  You know, I've gone days without seeing any coworkers."

Perhaps he hasn't seen any of his coworkers because they are lost in his 66,000 square foot, waterfront humble abode:

Here is one of the key questions about the development of a vaccine that you can find at the 32 minute 50 second mark:

"Is it possible that in a few months time that there's going to be this growing need to test for these antibodies in people i.e. to see if someone had the disease and recovered, maybe they didn't even know that they had it...maybe they could offer blood donation, serum donation..."

"Now, we don’t want to have a lot of recovered people […] To be clear, we’re trying – through the shut-down in the United States – to not get to one percent of the population infected. We’re well below that today, but with exponentiation, you could get past that three million [people or approximately one percent of the U.S. population being infected with COVID-19 and the vast majority recovering]. I believe we will be able to avoid that with having this economic pain.” 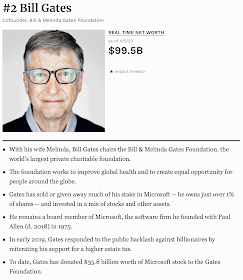 So, rather than letting humanity develop natural herd immunity through exposure to the virus itself which would give us long-term immunity to COVID-19, Gates would prefer that we all be tested and then vaccinated.

"Eventually what we’ll have to have is certificates of who’s a recovered person, who’s a vaccinated person.  Because you don’t want people moving around the world where you’ll have some countries that won’t have it under control, sadly. You don’t want to completely block off the ability for those people to go there and come back and move around."

And what type of certificate would be most likely?  A digital certificate of course since digital records are most easily accessed by governments around the world.

Further to that, according to this article on Off-Guardian by molecular biologist Rosemary Frei, there was an additional sentence at the end of the previous exchange that has since been edited from the video in which Gates states the following:

"So, eventually there will be this digital immunity proof that will help facilitate the global reopening up."

Apparently, on the afternoon of March 31, 2020, this sentence was edited out of the official TED interview (if you watch the video very carefully, you can see a rather subtle change in the video since the editing is not completely perfect).  I have searched widely on the internet and, despite claims that the original video recording is still available, I have been unable to find it.  If one of my readers does happen to find it, please post the link in the comments section with my thanks in advance.

So, basically, Bill Gate's vision of a post-COVID-10 utopia involves keeping us all under lockdown so that no more than one percent of the population gets infected and that herd immunity doesn't get a chance to occur followed by the implementation of a universal vaccination program and the issuance of certificates which will finally allow the free movement people require for a quality life.

Just in case you were wondering how long it would take to implement an immunity certificate, here's what Bill Gates new best friend, Dr. Anthony Fauci had to say on CNN on April 10, 2020 (2 minute 26 second mark):

I noticed that Dr. Fauci took a deep breath before he answered the question about Americans carrying immunity certificates.  For the record, here is the exchange:

Alisyn Camerota - "Can you imagine a time where Americans carry a certificate of immunity?"

Anthony Fauci - "You know, that's possible.  It's one of those things that we talk about when we want to make sure that we know who the vulnerable people are and not... This is something that is being discussed.  I think it might actually have some merit under certain circumstances."

Yes indeed, as we've seen in this posting, the world's most wealthy "epidemiologist" is certainly discussing it.

Before we close, let's look at another TED talk by Bill Gates from 2010 where he reveals his plan to get the planet to zero emissions.  Please listen to his comments starting at the 2 minute and 50 second mark:

"The world today as 6.8 billion people.  That's headed up to about 9 billion.  Now, if we do a really great job on new vaccines, healthcare, reproductive health services, we could lower than by perhaps 10 or 15 percent."

Reading between the lines (and that's not even particularly necessary), Bill Gates' comment about using new vaccines to control population growth is quite interesting.  It certainly has a ring of eugenics (a belief that the genetic quality of the human race can be improved by not allowing certain groups to reproduce) about it, doesn't it?  There's nothing like a good deadly pandemic to achieve that goal!

Remembering that Bill Gates is, at best, an armchair virologist and epidemiologist, why should anyone care what he has to say?  Apparently, the World Health Organization which is in charge of the global response to the COVID-19 plandemic cares a great deal, particularly given the hundreds of millions of dollars that the Bill & Melinda Gates Foundation has donated to this quasi-governmental organization.  Mind you, given Microsoft software's proneness to viruses, perhaps he is more of a virologist that I give him credit for.