House Resolution 127 and Gun Control in the United States

House Resolution 127 aka the Sabika Sheikh Firearm Licensing and Registration Act was introduced into the House on February 4, 2021 by Representative Sheila Jackson Lee (D-TX-18).  This act, if it becomes law, will significantly impact gun ownership in the United States and will target nearly every gun owner in America. 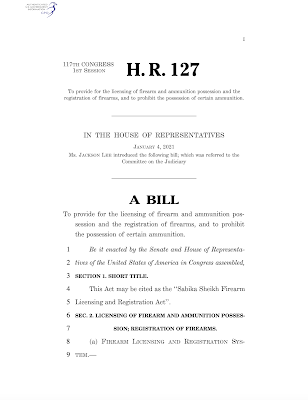 For those of you who are not aware of Sabika Sheikh, she was a 17 year old Muslim exchange student from Pakistan who was killed along with seven other students and two teachers during a shooting by a 17-year-old student at Santa Fe High School in Santa Fe in May 2018.

Let's look at some of the highlights starting with the licencing of firearm and ammunition possession and the registration of firearms:

Under the Firearms Registration System, we find this:

"Under the firearm registration system, the owner of a firearm

shall transmit to the Bureau—

(A) the make, model, and serial number

(B) a notice specifying the identity of any person to whom, and any period of time during which, the firearm will be loaned to the person."

The deadline for supplying this information to the ATF is as follows:

‘‘(B) in the case of a firearm acquired on or after the effective date, on the date the owner acquires the firearm."

The information on all registered firearms and ammunition will be stored on a database established and maintained by the Attorney General.  The database will be accessible to all members of the public, all Federal State and local law enforcement authorities, all branches of the United States Armed Forces and all State and local governments.

In order to get a gun licence, individuals will have to meet the following requirements:

(ii) after applying for the license—

(I) undergoes a criminal back- ground check conducted by the national instant criminal background check system established under section 103 of the Brady Handgun Violence Prevention Act, and the check does not indicate that possession of a firearm by the individual would violate subsection (g) or (n) of section 922 or State law;

(II) undergoes a psychological evaluation conducted in accordance with paragraph (2), and the evaluation does not indicate that the individual is psychologically unsuited to possess a firearm; and

(III) successfully completes a training course, certified by the Attorney General, in the use, safety, and storage of firearms, that includes at least 24 hours of training; and

(iii) demonstrates that, on issuance of the license, the individual will have in effect an insurance policy issued under subsection (d)."

For military-style weapons, the psychological evaluation is even more rigorous:

(A) the evaluation is conducted in compliance with such standards as shall be established by the Attorney General;

(B)  the evaluation is conducted by a licensed psychologist approved by the Attorney General;

(C) as deemed necessary by the licensed psychologist involved, the evaluation included a psychological evaluation of other members of the household in which the individual resides;

Firearms licences may be denied to individuals that:

1.) have a chronic mental illness or disturbance

2.) are addicted to a controlled substance or alcohol

3.) have attempted to commit suicide

4.) the individual has engaged in conduct that posed a danger to self or others

A licence can also be suspended for individuals who are under indictment for crimes that are punishable for a term exceeding one year in length.

The legislation also requires that individuals who have applied for a licence must have an insurance policy that insures the firearm owner against liability for losses or damages resulting from the use of any firearm by the person.  The annual fee for this firearm liability insurance is $800.

In closing, let's look at a few of the potential issues that face American firearms owners. First, none of this should be surprising to anyone given Joe Biden's campaign promise as shown here:

Second, the heavy use of psychological assessments allowed under H.R. 127 will potentially discriminate against anyone who has ever seen a therapist, had to get treatment for mental health issues relating to being a victim of abuse and veterans suffering from PSTD.

Third, the annual fee of $800 for "government firearms insurance" will discriminate against poorer Americans who are highly unlikely to be able to afford the insurance premiums which are certainly going to rise in the future.

Fourth, there is no grandfathering clause for any of the proposals listed under H.R. 127, essentially creating a subclass of "criminals" who were formerly regarded as lawful gun owners under current firearms laws.  Under this legislation, after the three month effective date of this legislation, all gun owners will be considered criminals until they declare all of the details of their firearms to the federal government.

Fifth, given the record number of Firearms Background Checks during 2020 and the first month of 2021 as reported on the FBI's NICS website as shown here: 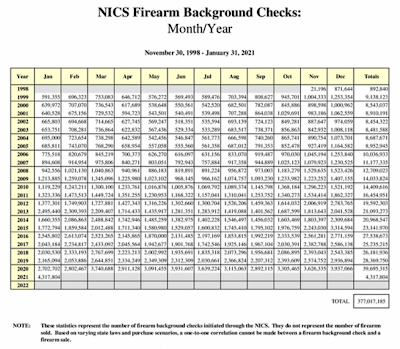 ...there are going to be significant headwinds to the Democrats' proposal for gun control and registration. 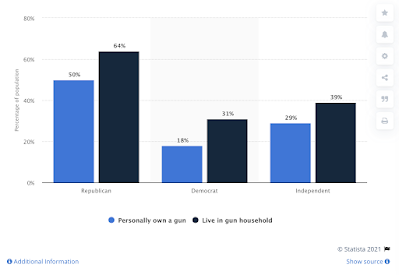 ...it is very clear which voters House Resolution 127 is targeting.

In closing, the bill has been referred to the House Committee on the Judiciary for its input.